AlienEmoji
I'm really curious about where the investigation will lead you, if you get to the bottom of it, please let me know!

Oh, also, I forgot to add that to my previous comment; I'm sorry if my previous lengthy reply came across negatively in any way, if so that wasn't my intent! I just really like to write about and analyze the few things that I actually know something about and cels happen to be one of them. I try to remember to mention this because I've had bad experiences in the past with people seeing me write a lot and just assuming I'm angry lmao

Yea the search bar really isn't the best, usually I just write in character name and figure company and hope I spelled it right. Or, just looking at character pages could work, if the character has fewer figures. To have less to browse through, you can go to a character's figure page and select 'prepainted' to remove articulated figures and garage kits... I mean you might already know all of this but just in case you don't that's a few tips. <:

Good luck with the cataloging!!
23日前

AlienEmoji
I'm staring at this from every angle and I'm sorry, but I really don't think it's a cel.

Firstly, cels are transparent, so a cut-out wouldn't be necessary if it was damaged on the edges. They are not on a white background like this one clearly was, since I can see the remnants of the cutout. The colours also don't seem to match the character, the blue being too light and the hair being a wrong shade of brown, though the latter might be affected by the lighting on your photo. I also think there's a gradient in her hair and some other parts, which would be impossible on a cel, though the gradient effect I'm seeing might also be due to the unclear photo. The lines look off too - too smooth and soft. They look like they were drawn with a pen or pencil.

The overall art style doesn't really match any of the Ah My Goddess shows I looked up, particularly the hair and eyes stylization, as well as the see-through hair, which is a more modern anime art trope. Honestly... I think this is fan art?

If this is a cel, then it's not like any cel I've seen before, and I've looked at a lot of cels... Do you know exactly which moment of the show it would've come from? When I buy cels I like to find the exact timestamp of when it appears, for example, I know that my DIO cel is from the 1994 JoJo’s Bizarre Adventure OVA episode 13, “DIO’s World”, at about the 24:35 minute mark. 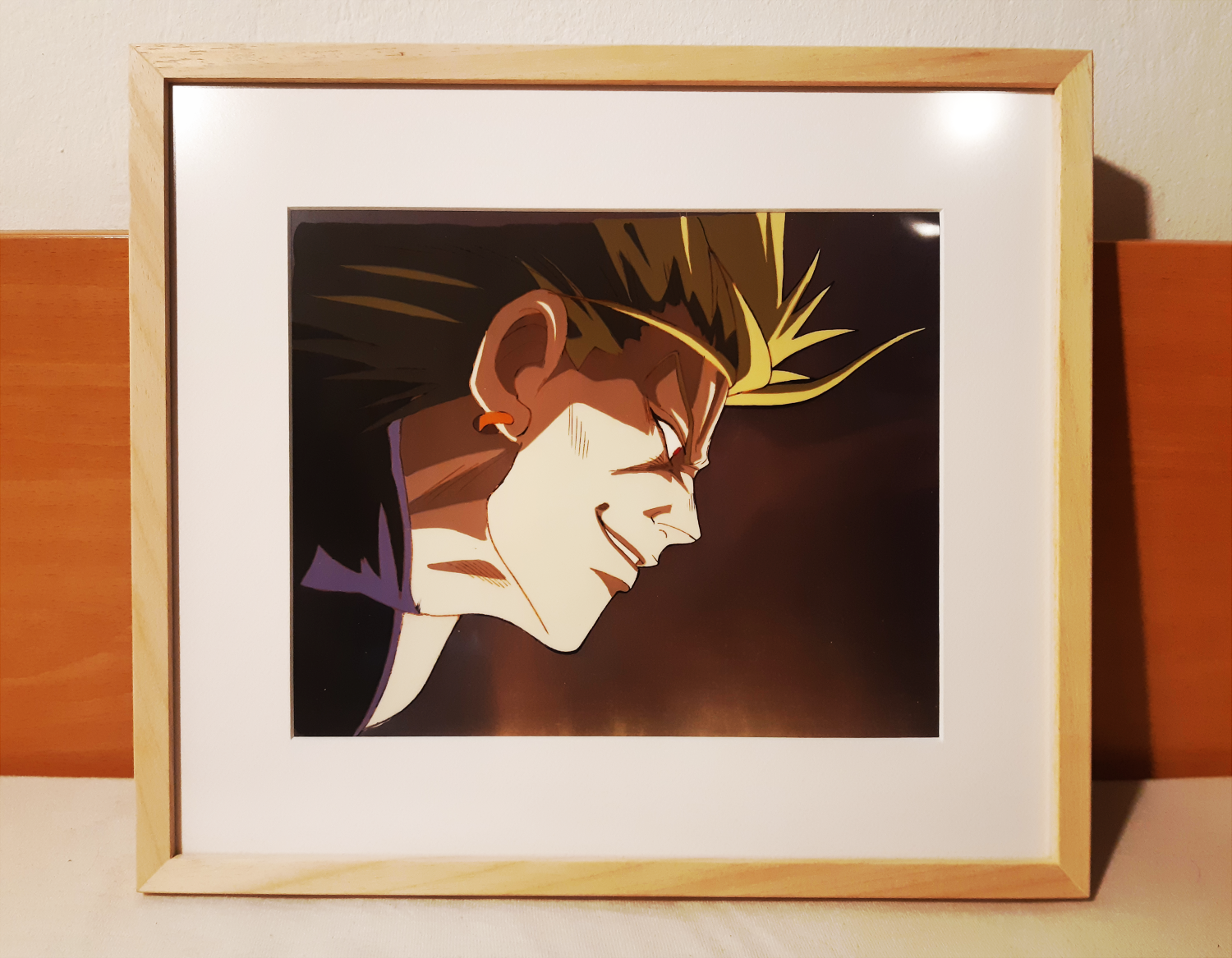 If you compare the two, you can see the linework is very different, as is the overall approach to colour - cel-animated shows generally had an overall stronger contrast of light and shadow (tho this particular cel is quite dramatically shaded, the contrast usually isn't THIS strong). My cel has a background layer, but character and background layer are almost never stuck together, they are on two separate layers, as characters are *always* drawn on a transparent layer.

I really don't want to ruin your enjoyment of the piece you own, it's still a very nice piece that seems to aesthetically suit the character on it very well, but I really doubt it's a cel.
25日前⊛

AlienEmoji
That looks really pretty, from the looks of it the photo probably doesn't do it justice since I'm guessing the mirror background probably makes for an interesting art piece

Is this a production cel though? The art style and shading are more intricate than what I'm used to seeing in cels & the lines look really thin. I'm guessing it's some other type of artwork?
25日前

AgentDrafire
I thought it would be more appropriate to post this here, so...XPEAC • 1ヶ月前 • #81925073Self-control, nope. Take a look at my pics and tell me I have self-control. I don't know how many figures I have but it has to be over a 1000. Self-control is not in my vocabulary.Ah, my bad! You have a really impressive collection though! We all don't have self-control, this hobby is too addictive! >~<
1ヶ月前

XPEAC
Head over to my pictures and look at my collection, have any questions feel free to ask. I have way too many figures.
1ヶ月前

Please take the time to read our Community Guidelines.
If you need any help with the site, please have a look at the FAQ. Also, if you find a bug or have a suggestion, please report it to the appropriate discussion at the official MFC club.